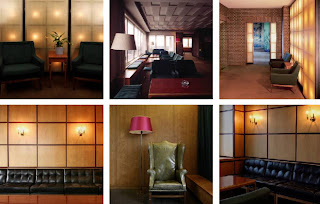 In the depths of Europe a hidden gem just became exposed. Anyone familiar with the golden age of aviation is most likely also very familiar with the airline Pan Am, who set the standard of modern aviation and swank traveling since the 1930s and onwards. The airline had hubs around the world and the airplane crew obviously needed places to stay when they were not high in the sky so Pan Am obtained apartments which pilots and stewardesses could utilize while they were jet setting around the world awaiting their next flight. One of those places is located in Berlin, Germany in a apartment house close to the Zoologischen Garten.

The modern high rise was built in 1966 (same year that I was born) and is located on the former site of luxurious hotel Eden which was blown apart during the air raids of World War II. The building was used by numerous Pan Am crews during the 1960s and 1970s and their favorite spot to hang out was on the penthouse floor, where Pan Am had built a very swanky and stylish airport type lounge which believe it or not, still exists today. The lounge not only features classic designer furniture and a modern sound system in all areas but also three outdoor terraces that overlooks Berlin-West and the Zoo. Only problem is that the lounge is private, so you will have to be well connected or join the mile high club with a steward or stewardess on your next flight to Berlin.

The perfect location for the ADAIN AVION europa launch!