My Patagonialpine morning began very early with a dawn chorus from the local Bandurrias ,a strange, exotic looking bird with a long beak and very loud squawk. The flock of three continued to screech and peck the ground as I went through my yoga routine close by, my sun salutations didn’t impress them even though the sun was shining and they seemed rather affronted by my downward dog, obviously too early in the morning for a new Welsh moon. They continued scratching as I stretched but my Cat finally saw them off with one final squawk. 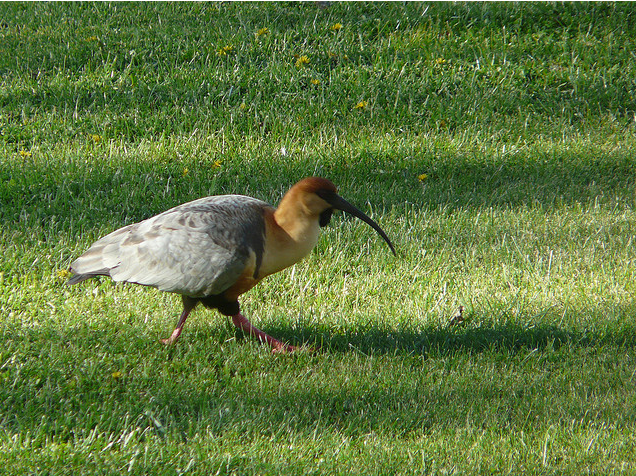 The afternoon was the children’s Eisteddfod, which was like any other except the songs and poems were mostly in Spanish and the Welsh folk dances had a slight South American accent in the execution of the steps. I would often forget that I was at the foothills of the Andes but reminded as people accompanied their slices of cake with the drinking of much Mate. Incredible to think that a many of the children had travelled 600 km in order to compete, and they did so with great gusto and hwyl. The proceeding were calmly steered by the gracious Margarita Jones de Green who very kindly introduced us to the crowd as artistas muy importante which was very nice indeed of her and wonderful to feel so welcomed and revered. This place was so different to Gaiman but equally as special. The venue for the Eisteddfod, Club Fontana, a large gymnasium type building, of a similar shape to the Galpon in Gaiman but much bigger and less apt in terms of ambience, not ideal but it could work for staging PATAGONIA150. 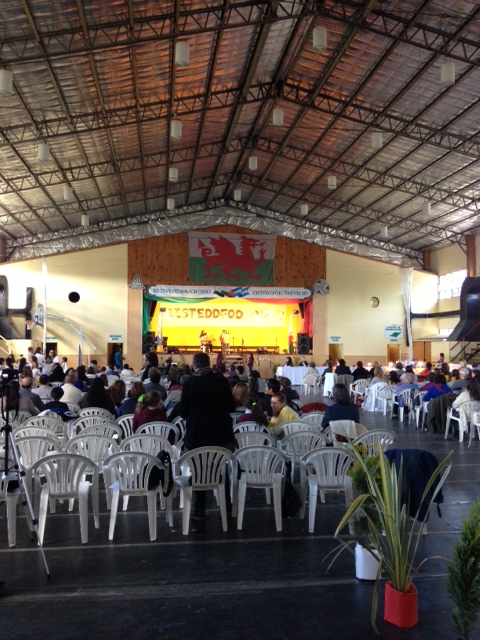 Whilst jogging I came across an abandoned farmstead with a shed full of curious boxes with shelves of honeycomb, discarded by the owner and the bees, it was both sad and symbolic, of what I’m not sure but it seemed potent and poetic. 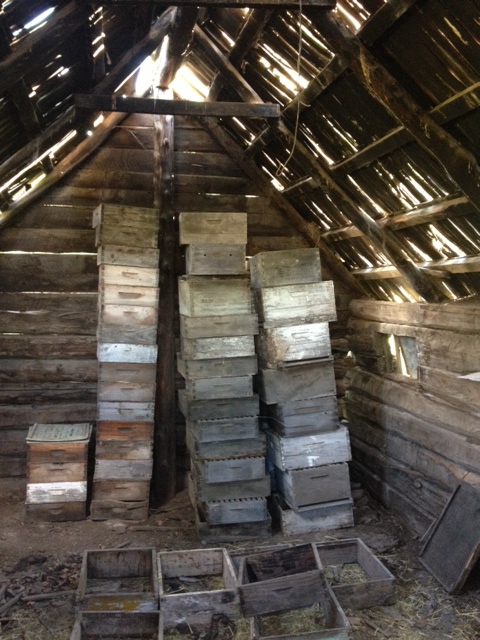 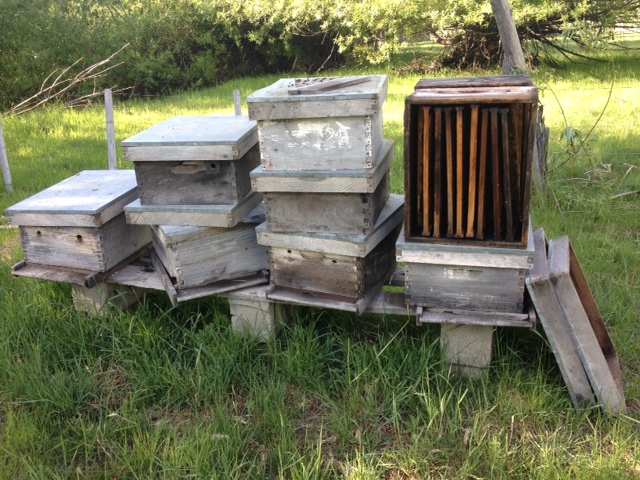 An image that conjured up the Biblical line “a land flowing with milk and honey“, a reference to the agricultural abundance of the Land of Israel which I imagine was the kind of place that they envisioned as they sang the following hymn aboard the Mimosa (many many times as a mantra).

We’ve found a better land
In the far South.
It is in Patagonia.
We will live there in Peace
Without fear of treachery or war,
With a Welshman on the throne.
Praise be to God.

As I wrote in an earlier blog entry, the power of prayer pushed the plough and finally after incredible patience, persistence and faith, the land finally delivered its promise.

Perhaps the scene with the discarded honey shelves signifies the perilous nature of natur and its closeness with the Welsh (as they are intrinsicly connected) is under scrutiny; a sign of a wider concern regarding the preservation of Y Wladfa, Agriculture and Culture mirror each other (this is the thread running through the next show Tir Sir Gar), if we don’t value, nuture and care for it we will, in the end loose it.

Hey farmer, farmer
Put away that DDT now
Give me spots on my apples
But LEAVE me the birds and the bees
Please!
Don’t it always seem to go
That you don’t know what you’ve got
‘Til its gone
They paved paradise
And put up a parking lot

The first building we encountered upon arrival in Trevelin was Capel Bethel which we find dramatically silhouetted against the majestic backdrop of the Andes, which is quite a vision but we discover that its visual impact is also under threat. 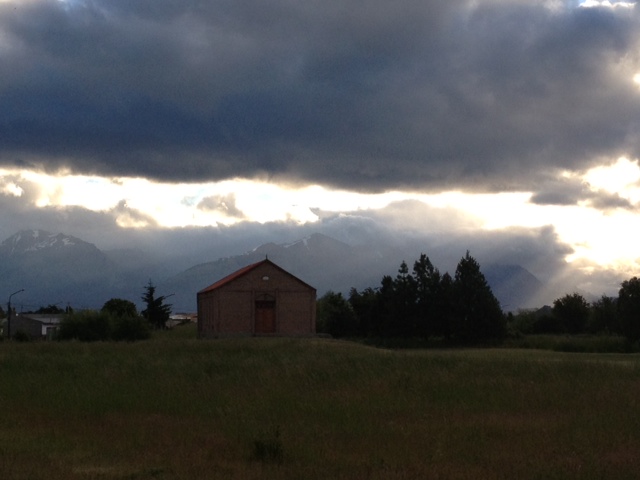 Understandably the Welsh community wish to develop the space around the chapel to construct a new school as the land belongs to the Chapel and of course needs must. Similar to the fate of Capel Salem (outside Gaiman) it is in danger of being swallowed by its encroaching surroundings, it’s prominence within the landscape potentially severely restricted, it’s presence muted. Perhaps this is emblematic of both the Chapel’s current position within the wider spread of the community, as religion is gradually marginalised. Naturally education is fundamental and the new school will shelter and nurture the future, but hopefully the architecture of the building that will protect and empower the children can be sympathetically designed to incorporate the Chapel in a contemporary style that is sympathetic, considered and unique, symbolising the now and then united.

(I must say this response was a gut reaction, I wasn’t aware what their construction plans for the land actually were. Having now been explained their idea it’s the land directly in front of the current school; a charming original building but far too small and antiquated so additional classrooms are much needed. Therefore the Chapel’s iconic position is safe and its preservation paramount to their development proposal). 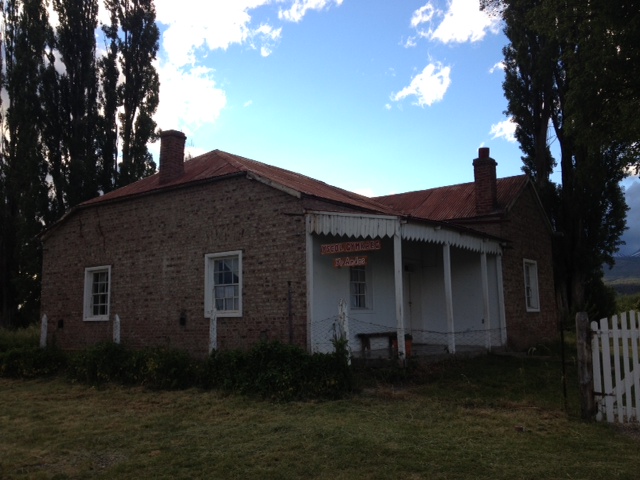 The tradition that was originally transported and transplanted here 147 years ago has adapted and transformed with the times and will continue to do so in order to survive.
Over the next three years the continuing legacy of Y Wladfa needs to be galvanised so that during the momentous anniversary in 2015 the future can be celebrated as well as the past, as Margerita Jones de Green said out to us… it will only happen once.

Hopefully we can make a significant creative contribution to that very special occasion.