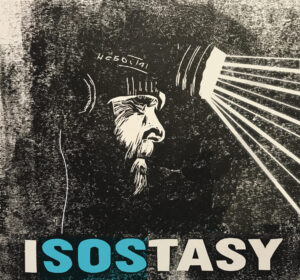 As darkness falls on the deep eve of Antarctic Mid-winter, there’s a break-in at the museum store.

Artefacts are not ransacked but rearranged.

This is a guerilla action – a poetic provocation.

It marks the 200th anniversary of the white continent‘s discovery – and its perilous state.

A tipping point, the result of our human actions – our human estate.

I S O S T A S Y – The balance between changes within the Earth’s crust and mantle, where material is displaced in response to an increase (isostatic depression) or decrease (isostatic rebound) in mass at any point on the Earth’s surface above. Such changes are frequently caused by advances or retreats of glaciers.

ISOSTASY is the response to an invisible crisis, as invisible as the whale.  Just as we never see the biggest animal on our planet, so we ignore our largest uninhabited continent.  We need to bear witness.  Only sound can stir us from our complacency: the deepest, loudest sound generated by an organism.  And like the whale’s song, the reverberations of ISOSTASY are as much felt as heard.