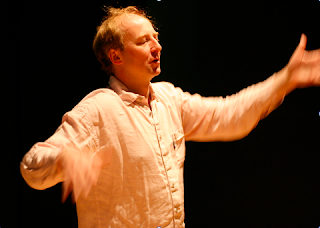 We are collaborating closely with the Royal Welsh Collage of Music and Drama as John Hardy (head of Contemporary Music) is composing the Adain Avion Arrival Anthem, which will be played by local brass bands whilst leading the Plane procession. John is also composing the sound score for Cold Rolling, a site responsive work by Tanja Raman in collaboration with Ballet Cymru .

The initial concept for Cold Rolling was born out of exploring the heritage and significance of the planes nesting location at the Works, once the largest Steel Production site in Europe. To draw from its rich legacy, involve some of its former workforce and re-imagine it as an immersive on-site Dance/Sonic experience.

We discovered that Ebbw Vale Male Voice Choir was mainly made up of former steel laborers so they became the obvious people to partner with in composing the sound score. When John and I approached them to participate and explained the concept of replicating the sound of industrial ambience via the mass male voice they were rather enthralled by this unusual notion and began to animate vocally the distinct sounds of their particular working area, as each section produced a different noise. This was a very exiting starting point and gave John strong clues to the potential direction of the composition.
Fortunately on Friday September 30th we were able to reserve the stunning newly opened Dora Stoutzker concert hall at RWCMD, which has incredible acoustics and work with Odilon Marcenaro (Creative Music Technology Lecturer) and his student Victoria Ashfield to record the choir. The 30 members who attended seemed at first quite overwhelmed by the space and the unusual nature of recording simple vocal sketches for the Cold Rolling background sound track. But as they broke the ice and tested the space by singing Robbie William’s “Angels’ (I couldn’t help but think of Dora watching from the rafters of her hall as the men sang“I look above and I know ill always be blessed with love….’) their voices soon relaxed and settled and with the skilled direction of their MD Mathew Hunt and John’s gentle assured guidance and accompaniment on piano a great session unfolded.
The tremendously exciting potential of the collaboration began to take root, finally after it being in my head for so long things were beginning to happen and take shape.

Due to the halls extraordinary audibility and clarity you were able to make out each individual voice as opposed to the mass swell you normally experience with a male voice choir. I had always imagined that a libretto wouldn’t work, proving too literal and didactic but of course primarily the choir needed actual words to sing. I sourced a glossary of steel production terms, descriptions, put them together and John created a few notated sketches for them to play with e.g.

Imagining that via post-production, John’s Electronic students would stretch, reverse, sample the words to such an extreme that they would become inaudible; an ambient backing track for the live vocal input from the choir.
But having heard and watched them sing the steel terminology in the hall it gave a pronounced sense of place; after all it is a site responsive work. They are former steel workers vocalising/harmonising the very location of their amassed years of hard physical graft, a collective memory through synchronised vocals, galvanising a sense of belonging. It was powerful and emotive stuff and this connection needs to be forged therefore the words may need to remain.

Tanja’s main stimulus is similar, drawing from the original architectural blueprints of The Works to device a choreographic vocabulary and score. Examining the structural frameworks of lost buildings to inform the skeletal configuration and the positioning of the body within the space.Her recent meticulous examination of choreographic processes in the context of group choreography (via her Major Creative Wales Award: CHOREO5 link) is sure to greatly influence her future practice, Cold Rolling with ten of Ballet Cymru’s dancers is a great opportunity to establish and nurture this new territory.

It’s important that Tanja and John share each other’s artistic processes as I am quite certain that they will inform and influence each other’s methodology thus creating a more coherent creative conclusion via Cold Rolling.