Just a little over a year on we are back in Gaiman….if feels good, familiar, comforting like a beloved blanket.

Our first and most essential stop is with Luned and Tegai and we are immediately embraced into their lives once more as though we never left , Luned is amused by my beard and I say that I am a Santa Claus in training which gives her an idea and she skips to her office to send an email. Over lunch we exchange important news and more importantly ‘clecs’ (gossip but not malicious!) . I give them an update on the project (which has changed somewhat) and thankfully they are still keen to assist however they can which is good as their corporation and involvement is now absolutely key. Fabio who lunches with us (Luned’s son and now keeper of the archive) is also a font of all knowledge regarding all things ‘Y Wladfa ‘…. I can’t wait to introduce Roger to them and their enchanting world.

After lunch Luned returns from her office and declares that I have a job to do, that on Friday I will play Sion Corn ( Father Christmas) in the primary school Christmas show …I have visions of Frank Spencer in ‘Some Mothers Do Ave Em’ where the nativity scene ends up with him as the Angel Gabriel being launched through the roof of the church. In preparation for my big role I better eat lots more cake….. mind you in Patagonia that’s not difficult so en route back to Plas y Coed we pit stop to have our first Dulce de Leche ice cream ….well it would be rude not too…and come Friday I don’t want to seen through my Papa Noel disguise!

In the evening we attend the Gawasanaeth Nadolig ( the Christmas Service) at Capel Bethel given by all the Welsh classes from Gaiman and Dolavon that includes a condensed dramatic rendition of the Nativity, complete with towel clad kids as shepherds…. As we sing Tawel Nos (Silent Night) with the sound of the wind blowing through the Poplar trees that surround us I gaze up to see if I can glimpse the Angel Gabriel’s legs dangling through a hole in the corrugated zinc roof …the service is utterly charming and we are privileged to hear Billy Hughes sing ‘Nadolig, pwy a wyr’ (made famous by Ryan Davies) and once again I am bewitched by his dulcet tenor tones….for sure he should be part of our show …his voice is so pure and poignant and somehow sums up the power and pathos of the Paith. 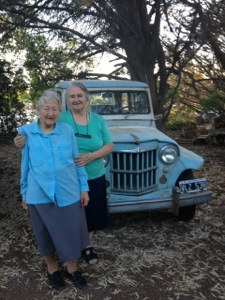