Wednesday
Drove to Trelew, which was stressful to say the least as normal traffic rules seem to be totally ignored, one local equated driving on these roads as pure anarchy! En route we visited the Centro Cultura de memoria just outside Trelew at a former airport terminal where 40 years earlier a group of political prisoners were massacred, obviously it was very sombre memorial. 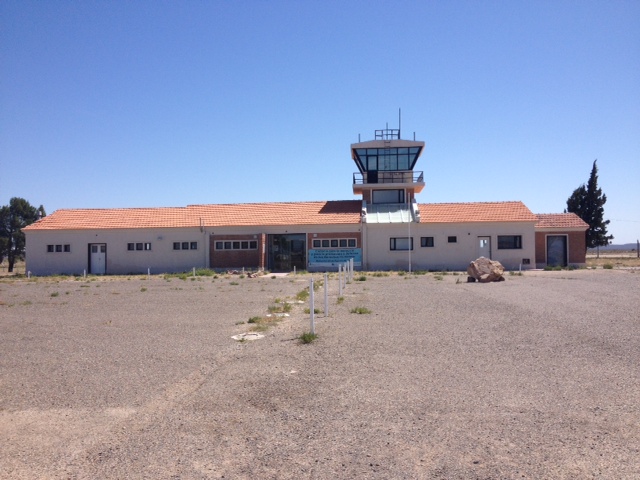 Miraculously we made it to our destination, Ysgol yr Hendre to watch a rehearsal of their Opera Roc which began with the learning of a new song which had the great line
Mae na rhai yn son bod dyn o Batagonia wedi cael i bwyta gan gorilla
/ There’s a man from Patagonia who was eaten by a gorilla
They picked it up in no time and I was impressed at how adept they were, must be due to all the eisteddfodau, for sure a skill passed down from their Welsh forebears. I wonder what they would make of the kids version of Tom Jones’s Sex Bomb, wittily translated to
Gwallt gwyn, gwallt gwyn mae gen i gwallt gwyn
Sian then visited the Palaeontology museum whilst I went on a quest to find El Touring Club, a great colonial style bar that I had visited in 92. 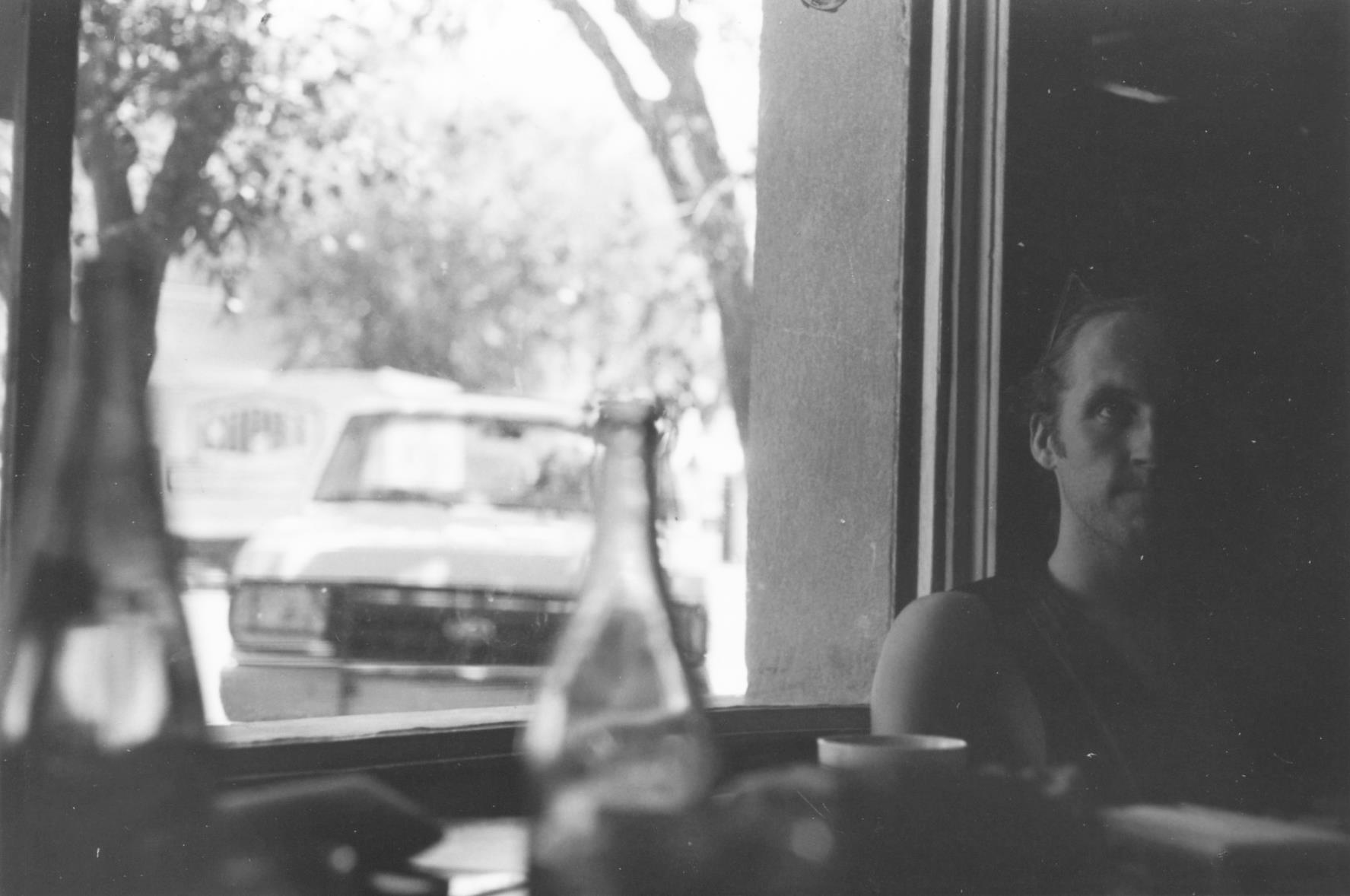 And there it was, the street in front dramatically modernised with sculptures, street  furniture and a mass of paving but mercifully unchanged inside and out, a beer was called for to celebrate its preservation and to calm my nerves for the return journey. 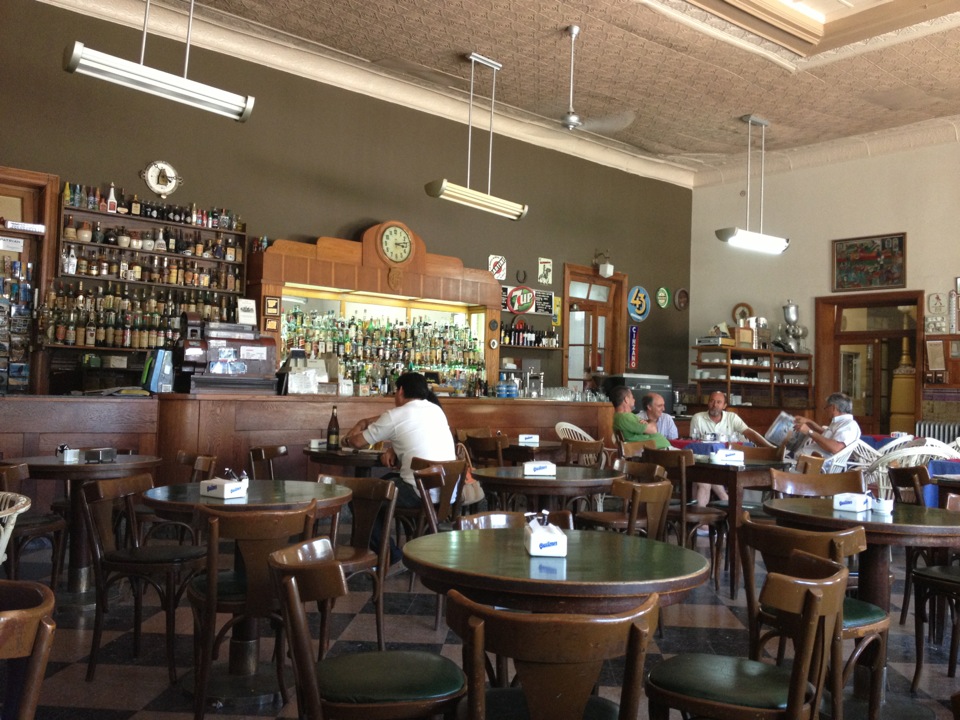 Loved the colour way of the bar tiles. 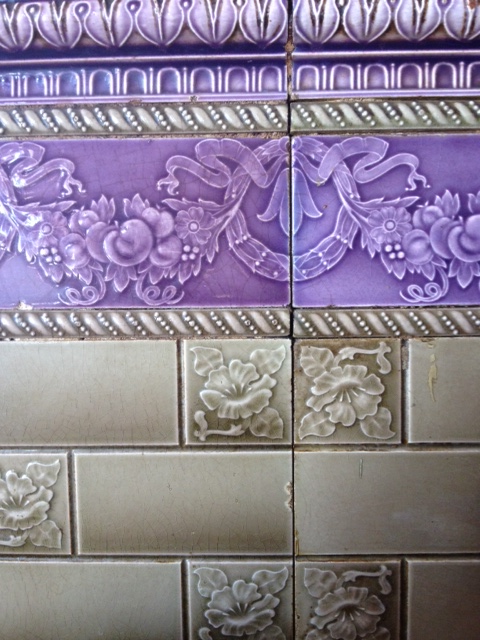 And these floor ones. 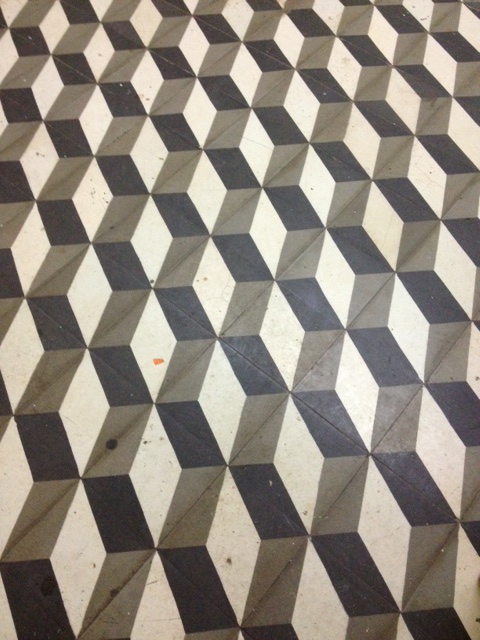 On the way back we payed a quick visit to the Gaiman cemetery in the blistering heat. 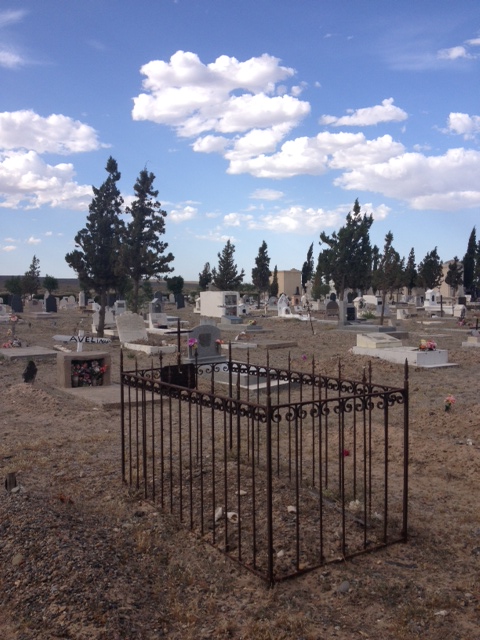 Followed by a visit to the Anthropological museum housed in a former delightful domestic abode. 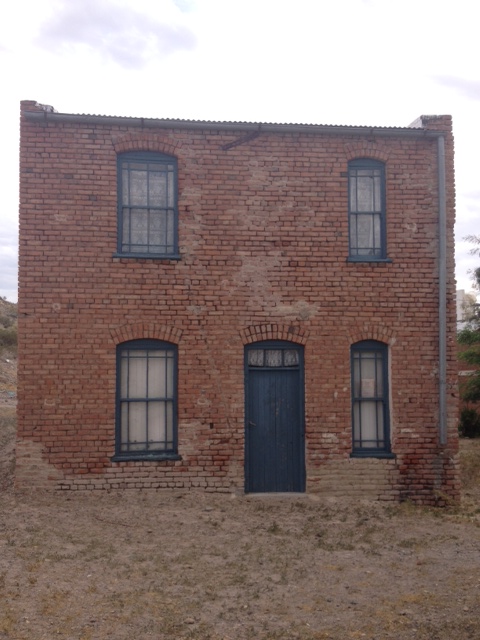 There was another building that was haunting me, I had noticed it immediately when we first arrived, a massive corrugated iron shed. 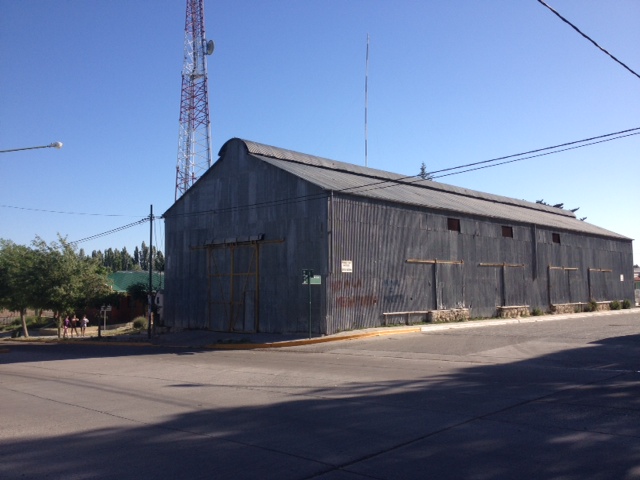 A similar clad building, well a series of them had had the same affect during our recent research recce in Carmarthenshire for our next show Tir Sir Gar with Theatr Genedlaethol Cymru, and as its turned out that those particular metal barns will play a pivotal role in the show’s concept and part execution so zinc is the way to think! The Galpon as it’s known locally; a former store for railway machinery located directly opposite Gaiman museum
( it being the former station). 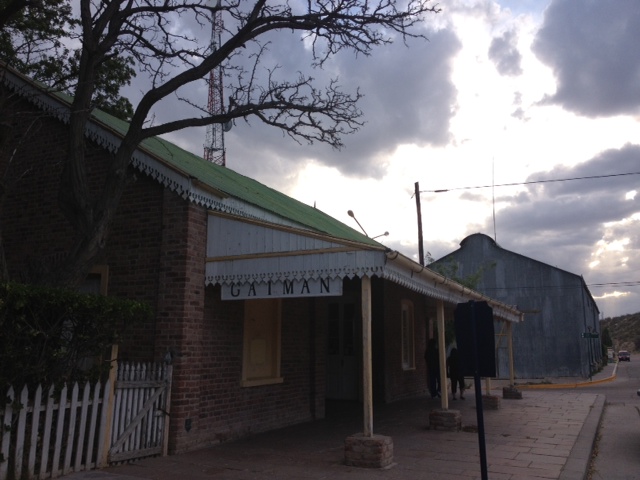 Lo and behold Fabio had a key as Tegai was storing horse drawn wagons made by the Welsh under tarp inside. It was an awesome space. 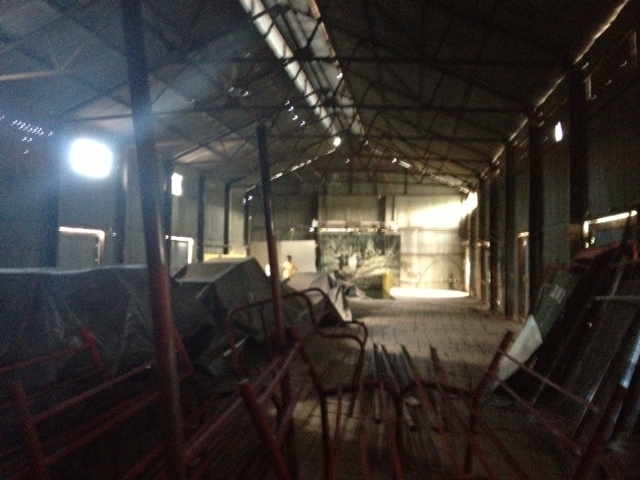 The perfect place to locate one quarter of the show, certainly big enough for an audience, participants and technical paraphernalia and with such tremendous resonance to the place. perfect! Now, to meet the owner, so Fabio gave us the name of the director of the local Tourist board and member of the council who’s name was Waldo Williams,
You couldn’t make this up!
Thursday
Spurred on by the discovery of  potential ideal location our early morning mission was to locate Waldo Williams . The tourist office put in a call and he arrived within two minutes. He was very very interested in our proposal as the council had big renovation plans for the Galpon with the aim of exhibiting artefacts too big for the museum so our project would help galvanize their cause. This was a brilliant prospect, I could imagine in the future assisting in curating the display, working closely with Tegai to re-imagine the collection would be a dream and right up my calle, so much exciting potential and so connected with our aims for Tir Sir Gar, linking Carmarthenshire with Chubut seems crazy but somehow appropriate, an alliance via agriculture, artefact and architecture through art. 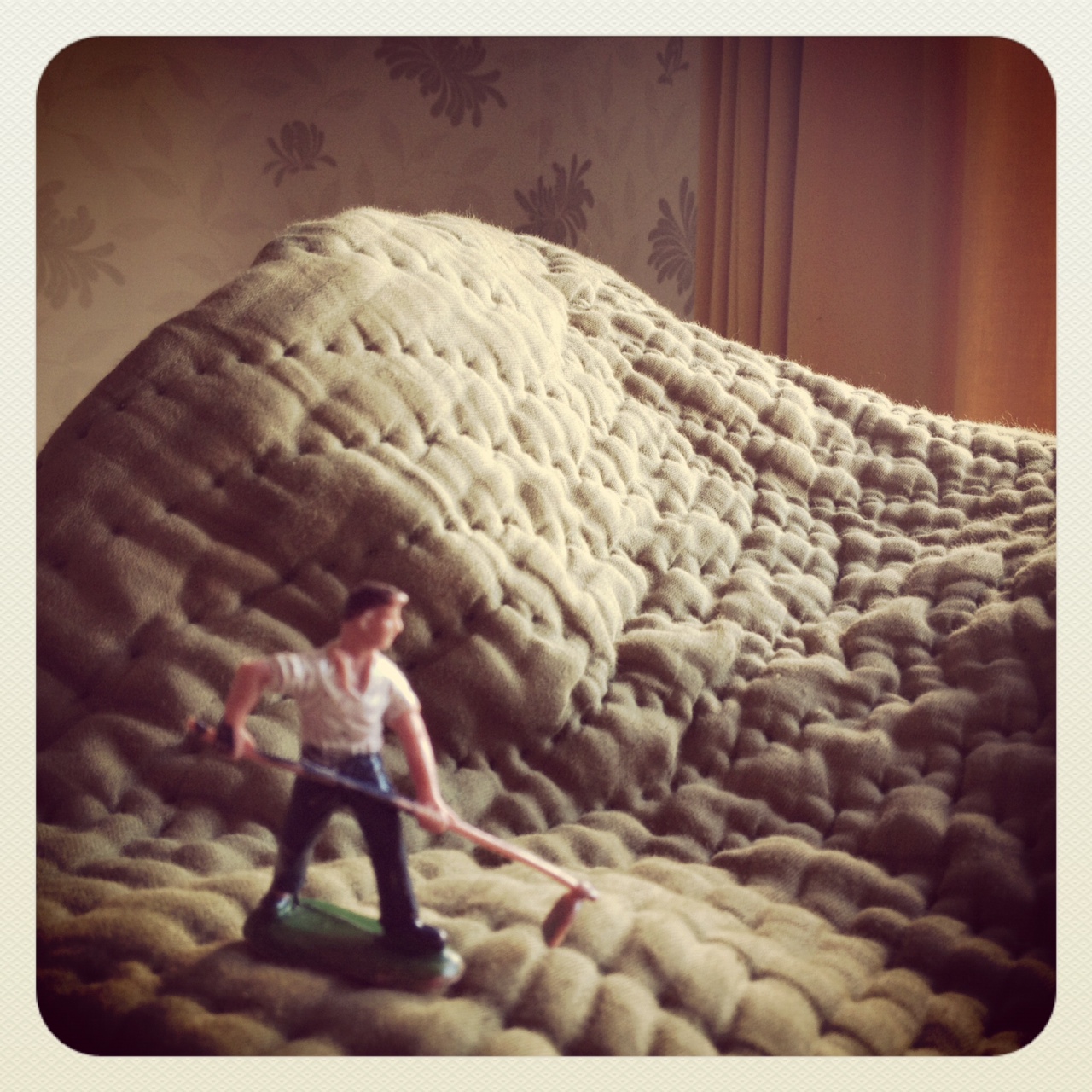 Waldo then took us to see the town mayor who was also of Welsh descent and equally as charming and rugged,  Gabriel Restuche who was immediately enthralled and enthused by our developing proposal. Brilliant, as having key partners in place is fundamental to the project’s progress and delivery, this was certainly true of Adain Avion with all the support and commitment given by the local councils and institutions at all three nesting sites.
I’ve realised that our work is not merely site but community responsive. Funny how one’s practise organically shifts, transforms  and adapts without you realising.
Gosh I think i’ve finally, artisticlly grown up!
Enough reflection…..we then drove to Rawson which seemed to be the Rhyl of Chubut or a kind of McArthur Glen designer outlet but with streets and no nice clothes, we quickly moved on to the seaside and the promise of Puerto Union which turned out to be Prestatyn in South American disguise, this was alarming as the lsat time Sian and I were there we were trapped in a caravan by marauding seagulls.
I doubt whether Patagonia penguins have violent tendencies but we weren’t going to hang around to find out. 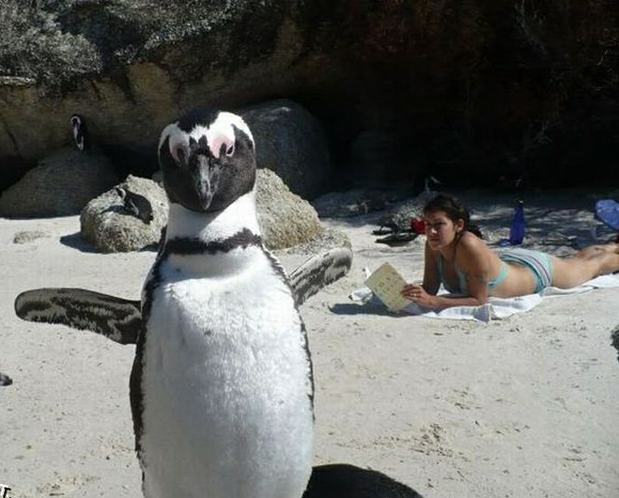 We quickly escaped the drabness and soon reached the lush and pastoral Bryn Gwyn, which should be renamed Gwyrdd. This due to the legacy of the Welsh settlers who had initiated the gradual transformation of the land through the pioneering invention of irrigation. The effect was enormous, enabling them to harvest wheat and export it to Buenos Aires and introduce bread to the rest of Argentina.
Poco bara, poca bara i bawb
Onwards with a pilgrimage to zinc and after much searching along dirt tracks we eventually found Capel Salem constructed totally from corrugated iron, unfortunately it was in a very poor state, well its immediate surroundings at least. It was much praised by Fernado Williams who described it as a gem of a chapel and the best example within the province. There was a bulldozer parked right next to it which had ripped up all the surrounding trees, leaving Salem exposed and vulnerable. 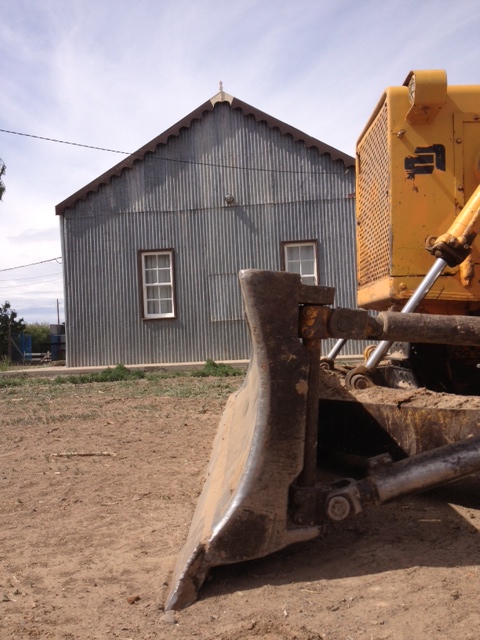 What an insult to the buildings heritage particularly as its the chapels centenary. It seems that the school next door is expanding so goodness knows its fate, I felt like taking it apart sheet by sheet and bringing it home, after all the museum at St Fagans is within my square mile. Even though the tradition and religion had initially been transported and transplanted here, agains all the odds this metal vessel had survived but how preserved is it, what of it’s future and the legacy of Y Wadfa in general, what would remain in a further 150 years?
Chapel:
Oasis in the wilderness; watering hole on the journey; a glimpse of the promise. But not our place, God’s place: where his gaze is magnified, his sternness concentrated. Leave frivolity and playfulness like twin six-guns at the door.                                        MP 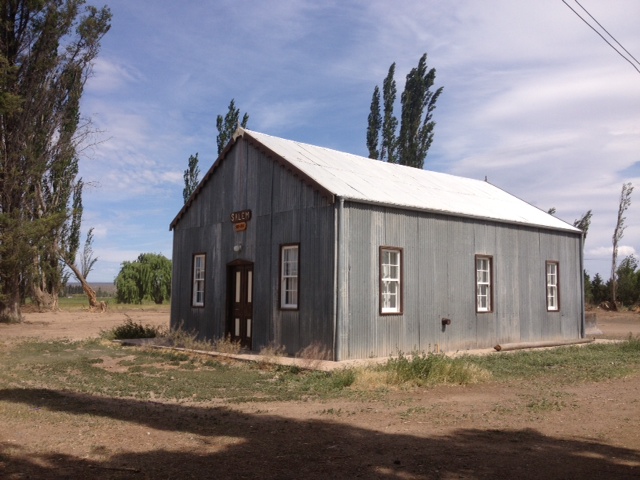 To lighten the heavy mood post Salem we stopped at ‘Siop Bara’ for hufen ia, vanilla topped with dulce de leche, a delicious caramel like cream, naughty but mucho bien and mucho needed. 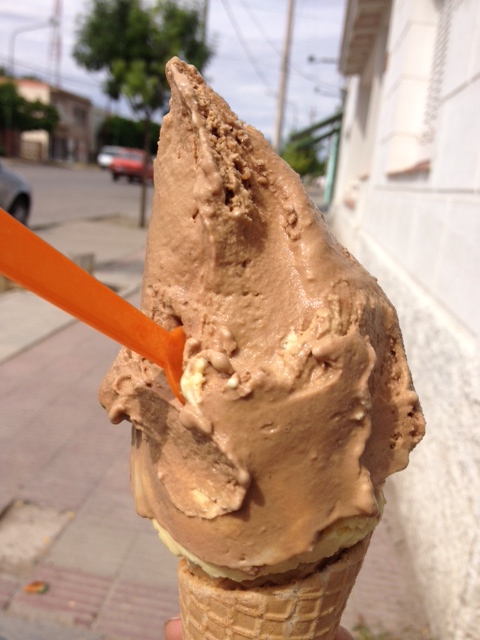 After further meandering along the dirt tracks we finally found Waldo’s chacra , I had cheekily asked if we could visit as his farm Bod Iwan was infamous. Build as a home for Llwyd ap Iwen, son of the Rev. Michael D. Jones (the man who orchestrated the establishment of Y Wladfa), who was murdered. He was shot dead in the co-operative store close to his home at Nant y Pysgod, about thirty miles from Esquel in the foothills of the Andes. He was the supervisor of the store, there has been considerable speculation about the exact details of the incident. Some commentators have argued that it was Butch Cassidy and the Sundance Kid, immortalised on the cinema screen, who were responsible for the murder. 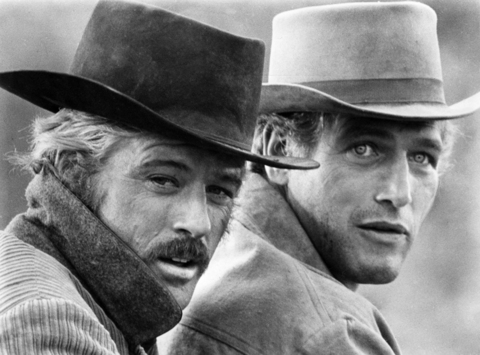 Others claim that the murderers were two thieves or ‘bandits’ from North America.
Bod Iwan now and then 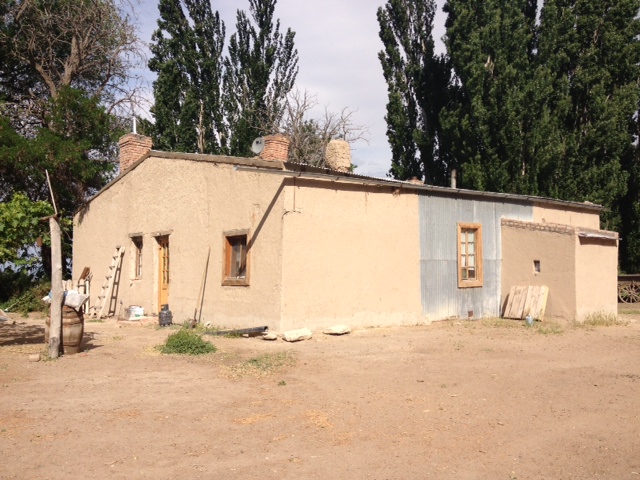 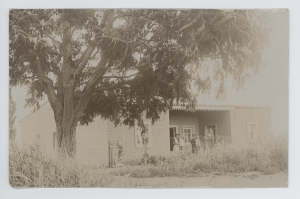 Agricultural remnants of Waldo’s ancestors peppered the yard, preserved by the arid atmposphere and the desert dust, llwch yr anialwch 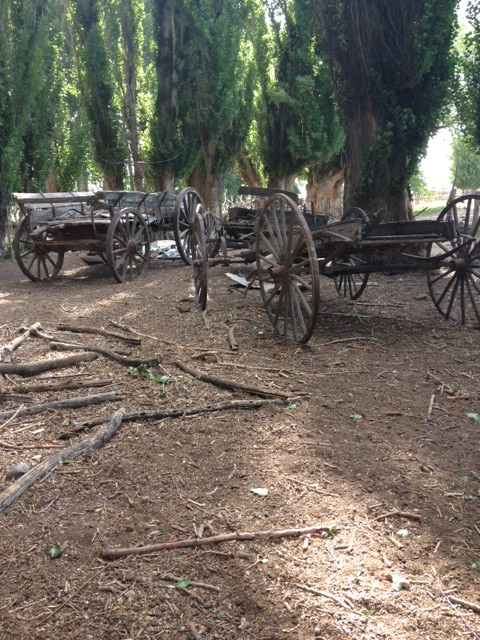 Waldo was but a distant  speck in the fields traversing on his red tractor amongst the purple headed alfalfa. We looked around, smiled at the cheeky faced sheep, left a note and made our way back to Plas – y – Coed. What a full day, we where in need of a siesta before our evening dinner with Lois Dafydd from Menter Patagonia and her friend Claire Vaughn, who were lovely and much delicious Patagonian red wine was enjoyed. This one in particular I can highly recommend.

An intense ruby colour, complex and elegant nose, with red berries and notes of vanilla and tobacco. In the mouth its medium-full bodied with ripe dark fruit flavours and a hint of oaky spice.
Hyfryd especially with a fine steak!
Salute